The Bridge Square Final Concept plan was adopted by City Council on June 21, 2022. 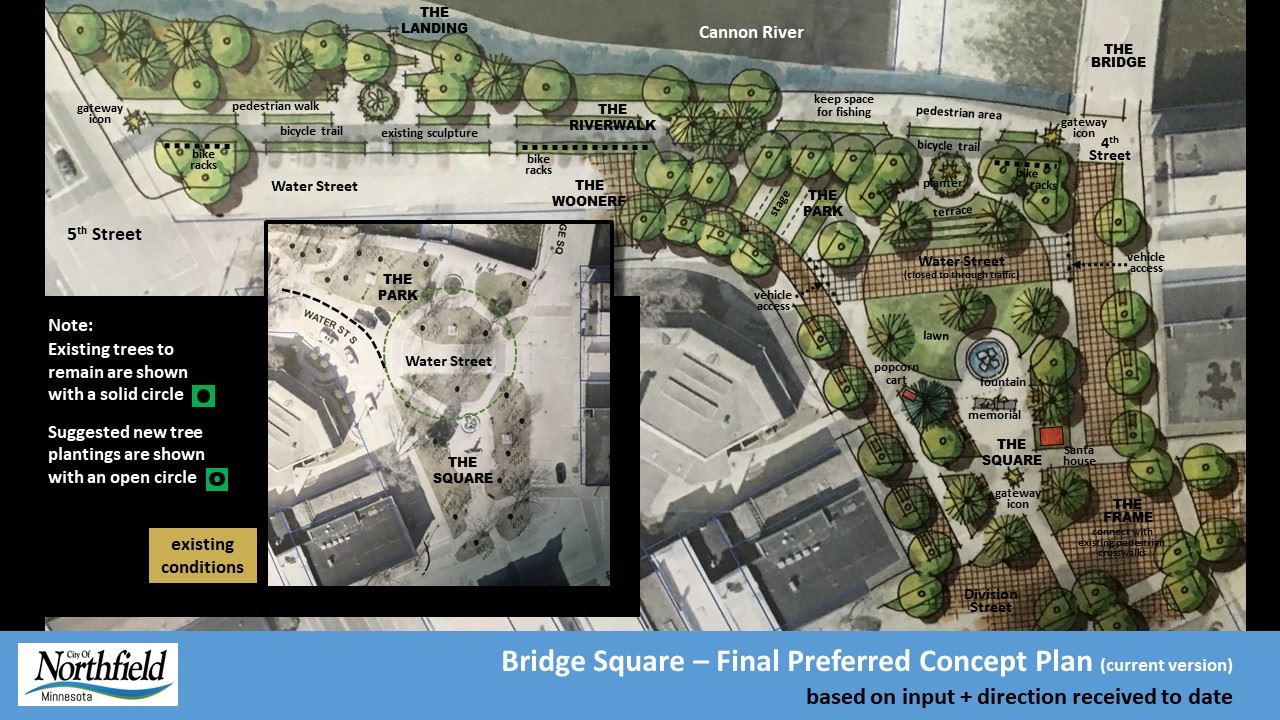 In 2018, as part of the City Strategic Plan, the City created a Riverfront Enhancement Action Plan that was adopted in 2020. One of the early initiatives in the plan is related to enhancing and activating riverfront parks. Bridge Square has been identified as an early initiative.

The City is in the process of reviewing the 2014 Bridge Square alternatives that were developed in the vision plan and developing a final concept to be adopted by City Council later in early 2022. The City has prepared a draft concept plan for public input.

Bridge Square is seeing increased use and activity as Northfield’s population has grown, and demands upon its space have increased, and changed. It has been described recently as “Northfield’s Living Room.” The Square is becoming more and more the focus of downtown activity as Northfield strives to bring more foot traffic to the downtown—to get people out of their cars and onto the sidewalks, thereby enabling those pedestrians to better partake of what the downtown has to offer. The Square is seen as a very important cog in the economic activity of the downtown.

There is also traditional interest in maintaining it as a sort of downtown green space/park with grass and landscaping (shrubs and trees) for casual socializing of users, and there is a memorial/monument with a substantial piece of artwork (the fountain). It has meaning and significance to many different people and organizations, from the Defeat of Jesse James Days activities to Taste of Northfield, to Winter Walk, Farmers Market, to the Vintage Band Festival, etc. The Northfield Roundtable in its self-proclaimed “30,000 foot overview” also places great significance upon Bridge Square.

Not all of these interests and uses can be accommodated thoroughly and completely without causing some conflict with others. For example, the current layout includes grass and plantings that are damaged and trampled by activities associated with other events.

The goal of the master planning exercise is to come up with a new and better layout for the Square that would better accommodate the needs and interests of all current and as many potential growing and future uses that can be identified. To achieve this lofty goal will require facilitation of someone like Landscape Architect John Slack, who has previously demonstrated his ability to lead Northfield through this type of exercise. Given the number of groups, and the diverse interests of those already on the scene, there is no doubt going to be a need for several rounds of public discussion and input. It is the expectation of the Mayor’s Streetscape Task Force that Mr. Slack’s responsibility will be to bring that all together in a consensus document to be adopted by the City Council.

At its meeting of May 21, 2013, the City Council, at the request and recommendation of the Mayor’s Streetscape task Force, approved a consulting services contract with John Slack of Stantec, Inc., to lead the City through this Master Planning Process.

Bridge Square is a contributing property within the Northfield Commercial Historic District.

Although it has been significantly redesigned since its formal construction in the 1920s, it retains fair historic integrity and the retention of the Civil War Monument especially adds to its significance.

Bridge Square is associated with the two historic contexts:

Historic contexts provide frames of reference that establish the relative significance of cultural resources, and provide a framework for making management decision about the resources. Historic contexts group information about related types of properties, based on a common theme, a defined geographical area, and a specific and defined chronological period.