The City of Northfield completed its redistricting process on Tuesday, March 16, 2022. The Ward and Precinct map depicts the changes to Ward 1, Precinct 1 and Ward 1, Precinct 2. The polling location for Ward 3, Precinct 1 has also been relocated to Emmaus Baptist Church as shown on the map.

For a complete map of wards and precincts, please see below. 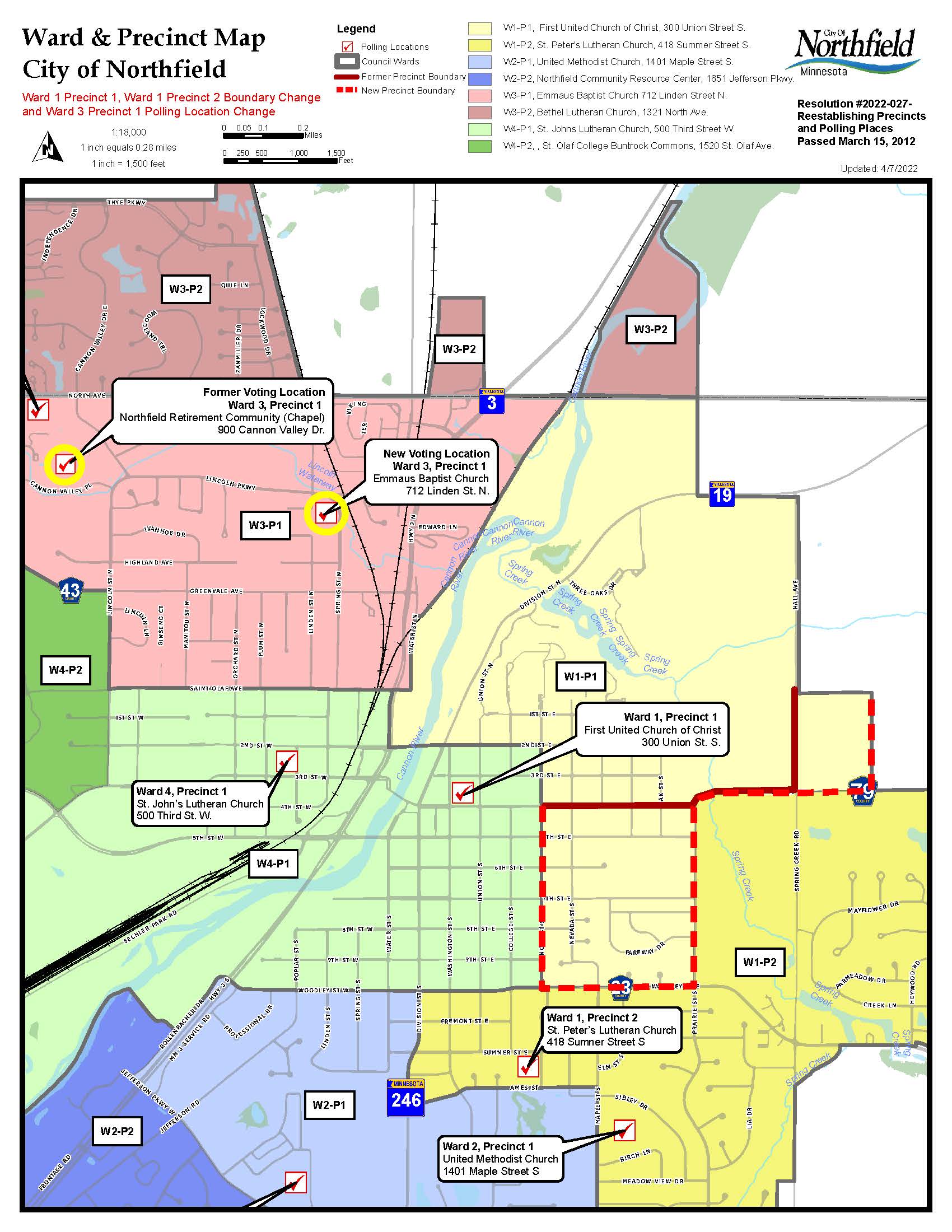 Redistricting is the process of redrawing the boundaries of election districts to ensure that the people of each district are equally represented.

Redistricting is done in the United States after the completion of Congressional reapportionment, which decides how many seats each state has in the 435 member House of Representatives. Reapportionment happens following the Decennial Census.

In addition, during the redistricting time period, cities and townships will establish (or reestablish) their precinct boundaries as part of the redistricting process, as will counties that have unorganized territory.

On February 15, 2022, a panel of Minnesota judges released the congressional and legislative district maps to be in place for the next decade. Every 10 years, the Legislature is charged with redrawing the state’s maps to reflect population shifts from the decennial census. Over the past several months, it had yet to be seen if the Legislature would meet its statutory deadline of February 15 to complete redistricting. Since legislators failed to reach an agreement, a panel of Minnesota judges has stepped in to create new maps, which are now available.

Now that statewide redistricting has been completed, cities must establish or reestablish election precincts, designate polling places, and, where applicable, confirm or redefine ward districts by March 29.

Below is also the map presented to the Council with the changes to Ward 1, Precinct 1 and Ward 1, Precinct 2.There are no other precinct changes proposed nor are there any changes in any of the Ward boundaries. The Council had indicated support at the February 8 Council work session to support this City plan as long as the State Legislative Districts or Congressional Districts didn’t require them to be changed. Since this is not the case, staff is proceeding with plans as the amended Redistricting Process, Timeline and Principles indicates.

A Redistricting Open House was held in the Council Chambers of Northfield City Hall, 801 Washington Avenue on Wednesday, on March 2, 2022 from 5 p.m. to 6:30 p.m. There was a short presentation from staff at 6 p.m.

If you were unable to attend in person, you can view a video of the presentation at either of the following links:

The final redistricting plan has been sent to Rice and Dakota counties and the Minnesota Secretary of State's office.

The Precinct Finder will be updated in the near future.